Iceland is on My Vacation Lady’s  bucket list and we really want to see the Northern Lights but don’t want to go in the winter when it’s so cold! 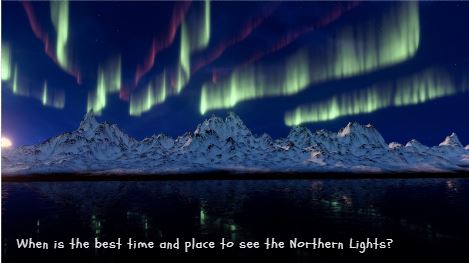 What are the Northern Lights?

“The Northern Lights or Aurora Borealis is a natural phenomenon that can paint the night sky with unearthly, surreal color. “

Since you can only see them at night, you want to come when there is the most darkness—from September until about mid-April – in the Fairbanks area.

Start looking about an hour and a half after sunset, but peak activity is between 10 p.m. and 2 a.m. solar time. (Solar time is 2.5 hours after clock time during daylight saving time (and 1.5 hours after during standard daylight time. That means the best time for seeing the aurora during Alaska’s winter is 11:30 p.m.–3:30 a.m. with the peak at 1:30 a.m. During Alaska’s spring and fall (September and March), the best time to view the aurora is 12:30 a.m.– 4:30 a.m.

Northern Canada will be the best location to see the Northern Lights.  Optimal viewing is September through April, when solar activity is highest, from just about anywhere away from urban light pollution, particularly our dark sky preserves.  Yellowknife, in the Northwest Territories (north of Alberta and Saskatchewan)  is one of the best spots to see the Northern Lights but take a heated seat— it can hit 40 degrees C below zero!

The best place to see the Northern Lights in Finland is in the northern Lapland area, which is almost entirely located within the the Arctic Circle. During the winter months, the sun rarely comes over the horizon, you can expect to see the Finland Northern Lights with regularity, and other peak seasons include February through March and September through October.

The northern lights is often seen around midnight and is best experienced on a dark, clear night in the period from September to the beginning of April.  If you are traveling during this period, you may see the northern lights from anywhere in the country, while in South Greenland, the northern lights can be seen from as early as the end of August

The best time to see the Northern Lights in Iceland is between October and April.  The optimum times will be when there is a  clear sky and cold weather and most obviously- complete darkness.  One of best places in Iceland to see the Northern lights is just around the Reykjavik area. Believe it or not, on a really clear night the northern lights can be seen from the middle of downtown Reykjavik but for more intensive displays however, travelling outside of the city and suburban areas is recommended.  We have a few clients traveling to Iceland in January and they’re hoping to see the Northern Lights on an evening tour from Reykjavik.

The city of Tromso in northern Norway is probably the best place to see the Northern Lights.  Situated about 220 miles inside the arctic circle, every year during December and January, the sun never rises above the horizon.

In Norway, the northern lights as visible most frequently in late fall into  winter and early spring but the best months are October, February and March. Even though you might be able to see the northern lights from all over Norway, it is definitely best to make your way north, as daylight hours become lesser and you are physically closer to the display.

The Northern Lights appear around early September  until the end of March all over Swedish Lapland.   If you are there for winter activities like as skiing, dog sledding, or snowmobile excursions, there’s a good chance you might see them.  For the best chance of seeing the Northern Lights, try checking out the Aurora Sky Station in Abisko National Park.

Check out some of the great pictures of the Northern Lights

The Team of travel professionals at My Vacation Lady  works hard to help our clients plan their dream vacations and honeymoons by using the personal approach to honeymoon planning.