We all know that Hurricane Dorian devastated parts of the Northern Bahama Islands.

Many of the well know cruise lines have their private islands in the Bahamas and many are still accessing the damage.

Royal Caribbean’s Perfect Day at CocoCay was among those closest to the storm’s path. It avoided major damage but did experience debris and see trees torn down. “We started working on repairs as quickly as possible but we kindly ask that ‘you mind our dust’ or sand, as we continue our own recovery efforts,” the cruise line told CruiseRadio.net.

Nearby, Norwegian Cruise Line’s Great Stirrup Cay remains closed as officials work to assess the severity of the damage. Calls to the island are scheduled to start up Friday, September 13.

Meanwhile, Carnival Corporation’s Half Moon Cay “suffered minor damage along with some beach erosion,” the company confirmed. Holland America Line remains on track to return on October 21 while Carnival Cruise Line is scheduled to commence calls on Thursday, September 12.

(1/1)#HurricaneDorian Update: We have no ships in the anticipated storm path. Initial reports show only cosmetic damage & beach erosion on #PrincessCays. The safety of guests & crew is always our first priority & we’re closely monitoring for potential impact to future itineraries

Disney’s Castaway Cay is currently closed for cleanup with calls scheduled for Friday, September 13. The cruise line said its needs to clean up the landscaping, make minor repairs to the roof of a covered pavilion area and evaluate the island’s pier and ship channel before it can reopen to guests. 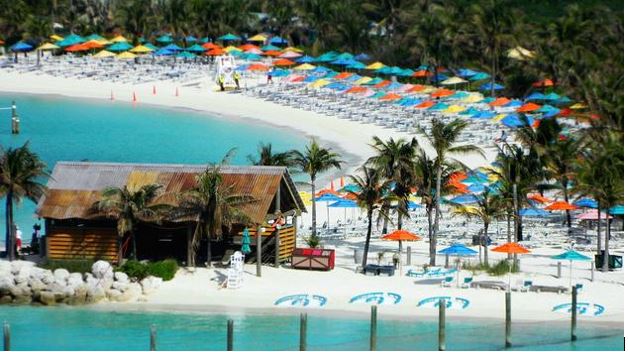 Finally, construction on MSC Cruises’ new Ocean Cay Reserve off the coast of South Florida is scheduled to resume in the “following days.” The private island is slated to begin welcoming guests this November.

The team at My Vacation Lady has been following up with all of our clients effected with the updates on the private islands as we receive them.