Have you ever heard of the Azores?  Chances are you haven’t, unless you’re  from Boston or Toronto, where many Azoreans now call home.

Where are the Azores?

Before considering a honeymoon in the Azores, let’s first find out where it is located.  Comprised of a chain of 9 islands, the Azores lie right in the middle of the Atlantic Ocean, and is actually the closest European land mass to America.  It is part of Portugal and some consider this chain of island,s in the middle of nowhere, to be “magical”. We’re not talking Disney World magical but rather Mother Nature magical.  They were created by volcanic eruptions over thousands of years that created this Archipelago of unique islands in the Atlantic Ocean.

The Azores are primarily an undiscovered gem in the middle of Atlantic Ocean. They are about as “un-touristy” as you can get but still offer the European old world charm.

How do you get to the Azores?

Since they are in the middle of now where, how do you get to the Azores?  SATA airlines flies nonstop from Boston on Mondays, Tuesdays and Fridays and the flight is less than 5 hours.  They are a couple of hours away from Lisbon, Portugal so you might want to consider extending your honeymoon by staying in  Lisbon for a few days before or after your Azores visit. 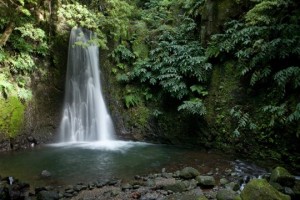 With so many fabulous honeymoon destinations, what is so fascinating about this country is its incredible variety.   The Azores offers the volcanic topography of Hawaii plus the lush green country scenery of Ireland, as well as the red-roofed buildings of Portugal.

Spring is the best time to visit when the hydrangeas blossom, and festivals and bullfights literally occur every day.

Of the 9 islands, Terceira is the most romantic. The town of Angra do Hero’smo is  a UNESCO World Heritage site and  was the pit stop for European vessels traveling to the Americas. You’ll find great seafood and wines, beautiful pottery and an 18th-century fort overlooking the harbor. Hotels and accommodations vary from rural guesthouses to several new luxury hotels.

What is there to do in the Azores:

When is the best time to go to the Azores?

The weather in the Azores is considered moderate year round.  It doesn’t snow there and it doesn’t get too hot.  The best time to visit is May-October, pretty much the same season as Bermuda.

If you are looking for beach weather, the warmer weather usually happens in June through to early September when the average temperature can be between 63 and 77 Fahrenheit.  August is the sunniest month, with only about 6 days of rain on average- quite a difference from many of the Caribbean Islands which are in the hurricane zone in August.

The weather in the winter ranges from between the 50’s and 60’s so it’s very pleasant, even in the winter.  It rains the most from October to March but like Ireland, unexpected showers can come at any time.  Even the sunniest summer day can be interrupted by rain and even the wettest winter day can be have couple of hours of beautiful sunshine.

Where should I go in the Azores?

Each of The Azores Islands is very different from the other.  Each Island shares wonderful ocean views a lush landscape and  and volcanic peaks.

Terceira Azores – this is probably the most cosmopolitan of the islands.  Terceira features underground caves and an underground lake, the largest volcanic crater and small vineyards, protected by black basalt walls, where the famous ‘Verdelho’ is produced – gently sloping down right up to the edges of the strange rock formations shaping the coast along the Ponta dos Biscoitos.  It is also one of the most popular islands to visit.

Sao Jorge Island – this Island is long and narrow with  sheer craggy cliffs, deep ravines, lush vegetation and seaside flats,  many of which  are nearly inaccessible from the land.

Graciosa – is known as the Island of Calm. It’s the second smallest of the  islands.  It’s most distinct feature is its Caldeira that can only be reached through a tunne which opens up to a rugged forested interior.   This is the spot where you will find find the huge underground lake called Furna do Enxofre

Pico Azores – Pico Island is the 2nd largest island in the Azores and  has the tallest mountain, actually a volcano, in all of Portugal.  Pico Island also has many vineyards and red wine is produced here. It’s also a popular point of departure for whale watching tours.

Faial – Faial Island had the last volcanic eruption in the Azores Islands which occurred in 1957. Faial has a popular marina and is a great place for whale watching, swimming with dolphins, diving and boat excursions.  This island is one that you should definitely visit.

Flores – is  named for its abundance of flowers and known for many beautiful waterfalls. Flores also claims the westernmost town in all of Europe called Faja Grande. Faja Grande claims to have the best sunsets of all the islands.

Corvo – is the smallest and most northern island in the Azores iwth a very small population.   About 75% of the island’s population lives in  Vila Nova do Corvo, the smallest town in Europe. 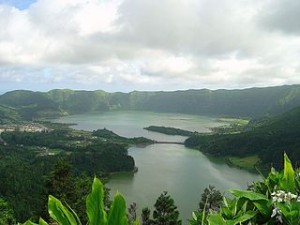 Sao Miguel Azores – the largest, most populous island is also known as the Green Island. It has lots  coastal villages with beaches, boardwalks, gardens and town squares. There’s a lot  to do on this Island including whale watching, sailing, hiking, golf, tennis and horseback riding and don’t miss a visit to the Sete Cidades, a place filled with legends and myths and the Blue and Green Lakes, connected by a bridge.  Since this island is the home of the international airport, this is one of the most visited islands.

Compared to some of the other destinations in Europe, the Azores combines adventure with culture and a bit of beach.

Check out this 30 second video  and see if you think the Azores might be the right honeymoon destination for your dream honeymoon.

My Vacation Lady is the top rated honeymoon specialist located in New Jersey according to Wedding Wire.   Contact us to see how our personalized approach to honeymoon planning can make the difference between a good honeymoon and a great honeymoon experience.