Thailand is exotic.  It’s far enough away that the distance makes Thailand special.  It can include a combination of culture, beaches, city, wildlife and nature.  You can have cities, mountains and beach all in one honeymoon!

Where is Thailand and how do you get there? 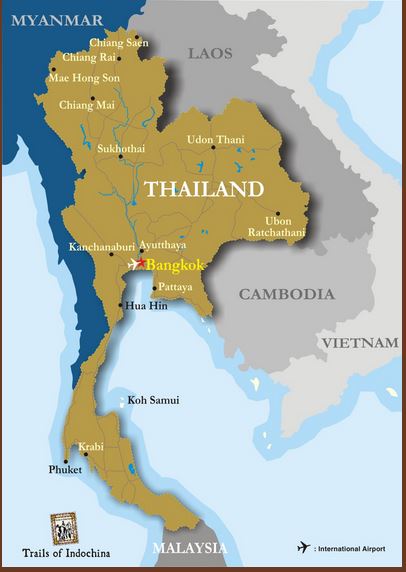 Thailand is in Southeast Asia and is surrounded by Myanmar (Burma) to the north and north west, Laos to the north east, Cambodia to the south east and Malaysia to the south.  It’s coastline borders the Gulf of Thailand and the Andaman sea.   While it’s a long flight it’s relatively easy to get to from many US airports.  Most of the flights will require a stop in Hong Kong, Tokyo, Seoul or another Asian city and a typical flight time (with layover) from the NYC area is about 22+ hours.

When is the best time to honeymoon in Thailand?

The best time to visit Thailand is during their cool and dry season- November and March.  While it may be a bit cooler during the winter months, you can still expect temperatures to be in the 80’s to 90’s.  Along with the best weather, it also corresponds to peak season and holiday season so prices will be steep.

April – June and September and October are thought of as the shoulder season months.  It’s generally dryer in Bangkok and the North, as well as the Gulf Coast beach areas.  Temperatures can be at their highest in April and May

Low season is considered to be July-October (monsoon season).  It can rain from afternoon showers to major downpours so plan on being flexible with your travel plans.  This season also will bring the lowest prices.

East coast beaches like Koh Samui and Koh Phangan are a bit dryer than Phuket from May to June.

What makes Thailand such a great honeymoon destination?

Thailand is more than just a lay on the beach with a drink in your hand kind of honeymoon- although the beaches are a huge draw.  A honeymoon to Thailand is usually a multi stop trip.  Most of My Vacation Lady’s honeymooners will start in Bangkok, head to the northern city of Chiang Mai for some culture, cuisine and wildlife and then end their honeymoon on the white sandy beaches of Phuket or Koh Samui or one of the other southern coastal cities.

How much does a honeymoon to Thailand cost?

Thailand is actually a pretty reasonable destination (depending on the season).  One of the most expensive parts of a trip to Thailand is the cost of the airfare.  While you can take a train from Bangkok to Chiang Mai, it’s about a 12 hour train ride.  You can drive for 10 hours or you can fly there in under 4 hours.   From Chiang Mai to Phuket (or one of the beach destinations), we recommend a flight (about 3 hours to Phuket, 2 hours to Ko Samui) and then another flight back home.

Depending on the season, the type of accommodations, how many different locations you’ll be visiting and how many experiences you want included, the prices can vary pretty drastically.  For a honeymoon in July of 2016 for 2 nights in Bangkok, 4 in Chiang Mai and 4 in Ko Samui, with some really neat excursions and activities, in 4 star hotels, ran about $8000 with airfare.   Another couple wanted lots of history and culture in early December 2014 and their 12 night honeymoon package ran about the same with flights and 4 star hotels.   For other honeymooner who opted for Chiang Mai and Phuket in late November of 2014) spent 10 nights total including some great experiences and their hotel, transfers, excursions and domestic flights was less than $4500.

My Vacation Lady customizes all of our honeymoon itineraries so yours will be based on your dreams and budget.

Some unique honeymoon experiences in Thailand 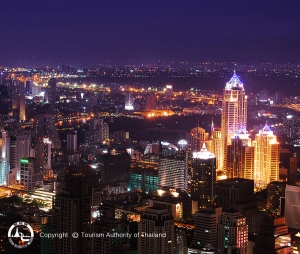 We’ve sent a number of clients to Thailand recently and have honeymooners that we just booked for next summer.  We included some very neat experiences for them— all based on what they were most interested in.

Most of our clients only stay a couple of days in Bangkok but the Grand Palace is a must see.   We also recommend a Floating Market Rose Garden tour for clients to see something unique to the region.  About 70 miles from Bangkok, you can see the everyday life at the Damnoen Saduak Floating Market, where vendors sell their produce out of canoes along the river.

Jennifer and Jason wanted to to see wild life— not just ride an elephant, they wanted to be interact with elephants and tigers and we were able to include 2 very special days for them while in Chiang Mai.

Their first is a full day adventure at the Elephant Nature Park where they are going to meet and feed the elephants before heading for a walk with them.  After lunch, they’ll bathe the elephants in the river.  This isn’t about riding an elephant at all but rather, being with them and letting the elephants enjoy their day with you in a safe environment.  This full day experience is called Pamper a Pachyderm.

Their next experience is a combination of visiting and interacting with tigers and then visiting a tribe of  Long Necked Hilltop people.  In the first part at the Tiger Kingdom, they’ll get to spend 10 minutes touching, playing with and taking photos of baby tiger cubs, then small tigers (5-10 months old) and then those that are about a year old and then that are up to 3 years old.  From there, they are heading to visit a village of Padong Long-necked Hilltop people and how they live their normal lives.

We also arranged a visit to another relatively remote hilltop village and then a trip to the most sacred temple in northern Thailand- Wat Phrathat Doi Suthep.  We hope it’s a clear day so they’ll be able to see panoramic views of the city of Chiang Mai from the temple grounds.

Some of our other clients have enjoyed cooking classes in Chiang Mai and others have spent sunrise with the monks before continuing up the mountain to the Wat Phrathat Doi Suthep Temple where you can climb up 309 steps or take a tram to the top of the main temple complex.  Others enjoy riding elephants and then taking a river rafting tour. 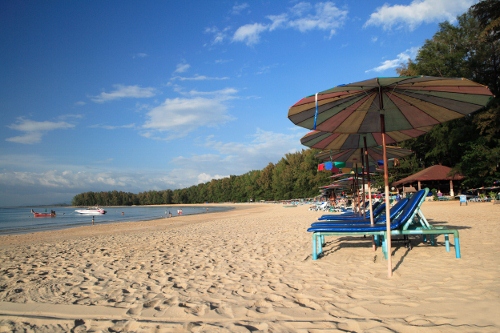 Nothing ends a vacation or honeymoon to Thailand like a beach stay and Phuket, Ko Samui and Krabi are some of the top beach destinations in Thailand.

Take a speed boat from Phuket to the Phi Phi Islands (great for watersports and snorkeling in caves and lagoons).  Kho Phil Phil Leh is the island where Leonardo DiCaprio’s The Beach was filmed in 2000.

OR, if you are a James Bond fan, check out his island– in Phang Nga Bay where the Man with the Golden Gun was filmed.

Learn about Thai culture and make a Kratong (a floating flower arrangement) after spending the day snorkeling in and out of caves and hongs.

If you want a crazy party night life, check out the Full Moon Parties on Koh Phangan Island.  This all night beach party can host a few thousand of party crazy people.

Have we peaked your interest in Thailand?

My Vacation Lady can help design your dream honeymoon or vacation to Thailand.  We take the personal approach to vacation and honeymoon planning.